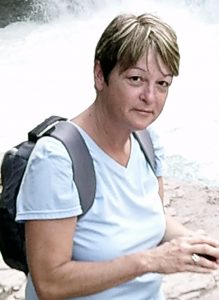 She had a massive stroke at home on January 15.

She was united in marriage to John Donald Kelly on February 1, 2014, in Kahoka.

She is survived by her husband, Donald, of the home; her mother, Anna King, of Keokuk, Iowa; one son, Tim Holmes and his wife Veronica, of Henderson, NV; one daughter, Lisa Gregory and her husband Dustin of Kahoka; one granddaughter, Riley Gregory; one stepson, Ethan Kelly; one brother, Scott Haskins of St. Francisville, MO; one sister, Lana Starr of Keokuk, IA, and lots of nephews, nieces, aunts, uncles and cousins.

She was preceded in death by her father.

Carrie worked for many years at the rubber plant in Keokuk, IA.

She was a loving wife, beautiful and vivacious.

She loved keeping a beautiful home and liked growing flowers, collecting knick-knacks, and displaying them in the home.

She also loved her two cats, Mr. Magoo and Felix.

A memorial service will be held at Freedom in Christ Church (Ray Gilbert’s), February 22, at 11:00am in Kahoka.