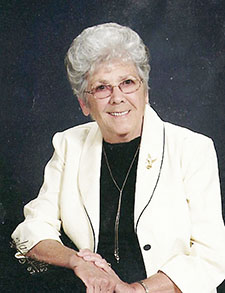 She was born on October 7, 1929 in Wayland, Missouri, the daughter of Herman and Mary Francis Wiegand Neves.  She graduated from Wayland High School with the Class of 1947.

She attended two years of college in Kirksville, Missouri.

Marie had been employed as a CNA and a med tech at the Clark County Nursing Home for nine years.  She then worked as a teacher for Clark County Head Start for twenty-six years.

She was a member of St. Michaels Catholic Church in Kahoka and a member of the Altar Society.

Marie loved to collect things and had large collections of salt & pepper shakers, spoons, wind-chimes and colored dishes.  She enjoyed creating floral arrangements and making photo albums.   She enjoyed volunteering at various places especially the Clark County Nutrition Site where she enjoyed visiting with the all the people.

Marie was a loving mother and grandmother and cherished the times she spent with her family.

She is survived by five daughters, Vickie Hudnut and her husband Vernon of Kahoka, Ann Smith and her husband Roland of Farmington, IA, Wanda Wheeler, Brenda Sommers and companion Todd Worrell and Tammy Meyers and companion Troy Cochenour all of Kahoka,  ten grandchildren, seventeen great-grandchildren, one brother, James “Butch” Neves and his wife Shirley of Kahoka and one nephew, Douglas Neves along with many great nieces and nephews.

She was also preceded in death by her parents, one daughter, Sharon Bergman, a great grandson, Tripp Hudnut, one sister, Henrietta White, and two brothers, Joe Neves and Chuck Neves and a nephew James Neves.

Due to the state and federal guidance on gatherings due to the COVID-19 pandemic, there will be no public services or visitation at this time. A Celebration of Marie’s life for family and friends will be held at a later date.

Vigen Memorial Home in Kahoka is assisting family with the arrangements.