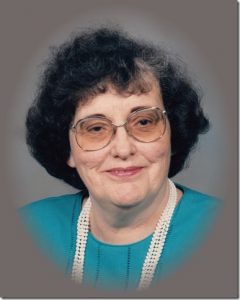 Paula Elizabeth Moore Ludwick, age 87, of Kahoka, MO, passed away Friday, May 1, 2020 in the Scotland Co. Hospital in Memphis, MO.

She grew up in Memphis, graduated from Memphis High School, and attended Central Methodist College in Fayette, MO.

She was preceded in death by her parents; her husband; and a brother, Dee Moore.

Paula was a faithful and active member of the First Baptist Church in Kahoka,  a former Sunday School teacher and loved helping with their Sunday School ministry at the Clark Co. Nursing Home.

She was retired from the Sever Memorial Library and following retirement became a Library Board Member.

Paula was a talented artist and loved preparing Children’s Story Hour at the library and making puppets to go with each story.

She was also very involved with the State Library Children’s Summer Reading Program.

For many years, she designed the artwork for the publicity posters, bookmarks, etc to go with each summer’s theme. These usually featured animals centered around her beloved dog, Dusty.

She loved traveling on bus trips, her dogs, her beautiful flowers, doing crafts, and family gatherings.

A private funeral service for Paula was held on Tuesday, May 5, 2020 at 1:00 p.m. at the First Baptist Church in Kahoka with Pastor Chris Lind officiating.  Special music was recordings “The Old Rugged Cross” and “How Great Thou Art”.

Burial followed in the Kahoka Cemetery.

Friends could call at Wilson Funeral Home after 10 a.m. Monday until 5 p.m.

Memorials are suggested to the H.E. Sever Memorial Library of the First Baptist Church of Kahoka.