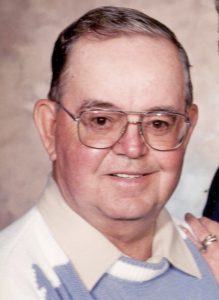 The summer between his junior and senior years of high school, he attended a tryout camp held by the St Louis Cardinals.

They were very impressed and told him to contact them when came of age.

Unfortunately, a shoulder injury during his senior year of high school ended his chances of a professional baseball career.

But he had caught the bug and was an avid St Louis Cardinals fan the rest of his life.

Upon graduation from high school, Gene enlisted in the Navy.

He was stationed in Boston and worked naval intelligence until he was discharged in 1950.

Upon coming home from the Navy, he met the love of his life, Carol Legg, and they were united in marriage in Aroma Park, Illinois, on July 11, 1953.

They were married for nearly 56 years when Carol preceded him in death in 2009.

Over his many years as Executive Secretary of Hancock County Farm Bureau he headed the Young Farmers and Women’s Committees in the county.

He worked closely with the local FFA Chapters and many of those young men and women became members of the Young Farmer Committee and some served on the Farm Bureau board.

Helping farmers with their needs was very important to him.

Gene had his first hole in one on the #2 hole at the Carthage Golf Course, the same first hole as his wife.

When he wasn’t golfing, he loved watching and listening to his Cardinals, listening to polkas and country music, and putting together puzzles.

He had just finished one a couple days before he passed with the help of his grandson Randall.

He was preceded in death by his wife Carol, his parents, brothers Duane Greene, Benn Ehrich, Joe Ehrich, and sister Bernice Fink.

In lieu of flowers, memorials may be directed to the Carthage Golf Club.