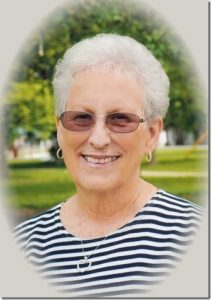 Betty was born June 6, 1936 in Argyle, IA, a daughter of Karl and Darlene Humes Karlson.

She graduated from Wyaconda High School in 1954 as Valedictorian.

On February 12, 1956 she was united in marriage to her high school sweetheart, Clyde M. Smith, Jr. at the First Christian Church in Fort Madison.  He preceded her in death on March 28, 2017.

She was preceded in death by her parents; her husband; a brother, Robert Karlson; and brother-in-law, Bill Kurtz.

She worked a short time for National Garment in Memphis and in the late 1970’s went to work for Sheller Globe and worked there approximately 15 years.

She was a member and deaconess of the Kahoka Christian Church.  Betty and Clyde traveled all over the United States by motorcycle visiting all of the states in the continental U.S. They also visited Hawaii, but never made it to Alaska.

Betty embraced every area of being a homemaker.

She raised a large garden and enjoyed canning.

She was proud of her home and made sure it was always neat and tidy if anyone should drop by.

She enjoyed arts and crafts and was an avid quilter, who also could crochet and knit.

Her cooking was excellent and no one could match it.

She also made most of the family’s clothing including an occasional suit and jeans.

She truly enjoyed caring for her family and making life good for them.

Special music was recordings “In the Garden”, “How Great Thou Art”, “The Old Rugged Cross”, and Peace in the Valley”.  Also, “Amazing Grace – My Chains are Gone” recorded by Summer Roller.

Visitation was held at Wilson Funeral Home after noon on Tuesday with family receiving friends from 5-7 p.m.