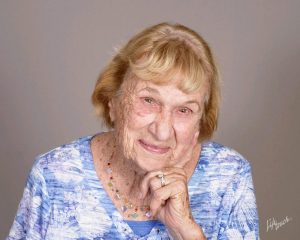 Thelma was born on May 23, 1925, in Keokuk, Iowa, the daughter of Frank and Iris (Harmon) Reed. On January 1, 1945, she was united in marriage to James Maurice “Maury” Bryant at the Presbyterian Church in Alexandria. He preceded her in death on October 16, 2006.

A lifelong resident of the Keokuk and Alexandria, Thelma was a member of First Christian Church in Keokuk.

She spent her working career employed at Thomas Truck and Swifts, and assisted her husband on the family farm.

She also worked at the Arrowhead Bowl in Keokuk when it first opened in the early 1960’s.

In her free time, she enjoyed swimming.

Thelma was an active member of the community, serving on many boards, including the Hoerner YMCA, the United Way, Big Brothers Big Sisters of America, domestic abuse and foster care.

She was an avid bowler, bowling in leagues for decades.

Her selfless giving of her time and talents touched the lives of countless children.

Thelma is preceded in death by her parents, her daughter Linda Schuette, and two sisters: Doris Reed and Mariellen Hoock.

Thelma’s life will be celebrated with a funeral service at 11 am on Monday, July 13, 2020, at DeJong-Greaves-Printy Funeral Home at 917 Blondeau Street in Keokuk, with burial to follow at Frazee Cemetery near Wayland, Missouri.

Memorials may be directed to the Hoerner YMCA, the Youth Bowling League, or the American Cancer Society.