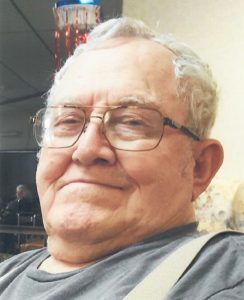 He was born October 3, 1933, in Reno County, KS the son of James J. and Nettie Mae Gould Murphy.  He was united in marriage to Nelda Faylene Speer on June 26, 1953, in the Wyaconda Baptist Church.

Surviving are one daughter Carol (John) Perkins of Hannibal, MO, and several nieces, nephews and cousins.

Richard was preceded in death by his parents, one son Richard D. Murphy, Jr., his wife in 2005 and one brother, Bill Murphy and wife Sue and one sister Mary Morris and husband Robert.

Richard attended schools in Iowa and Missouri and graduated from high school at Wyaconda.

Richard served his country in the United States Army in the Military Police.

In his earlier years he was engaged in farming in the Wyaconda area.

He was employed for several years at Knapheide in Quincy, IL.

He enjoyed fishing and spending time with family and friends.

There will be no visitation.  Graveside services will be held 10:30 a.m. Monday, August 10, 2020 in the Wyaconda Cemetery.   Reverend James Renot will officiate the services.