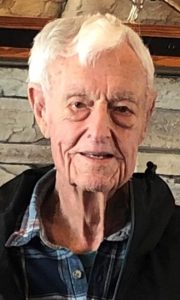 He was born on February 21, 1929, in Pekin, Illinois, to Gregor and Hilda (Reutler) Reuling. He married June Parr on October 12, 1957 in Bartonville, Illinois. She survives.

He was preceded in death by his parents and his sister, Diane (Reutler) Hoshor.

Terry spent his career as an X-ray technician at Methodist Medical Center in Peoria, IL. After retiring, he and his beloved wife June moved to Seldovia, Alaska, where they lived many wonderful years doing what they loved most — enjoying the great outdoors.

In 2006 they relocated to Kahoka, Missouri, and carried on their love of the outdoors on their acreage just outside of town.

Terry dearly loved fishing and hunting, and he and June made many friends and spent many happy years together doing just that.

He was an excellent storyteller and had a great sense of humor.

Terry never met a stranger, and he would do anything to help another person.

He will be deeply missed by all who were fortunate enough to know and love him.

A celebration of Terry’s life will be held at a later date.

Davison-Fulton Woolsey Funeral Home in Pekin is in charge of arrangements.