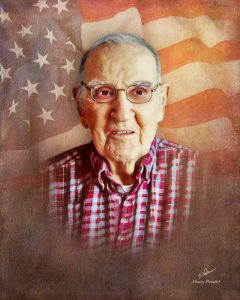 He was born on November 10, 1926 in Thayer, Iowa, the only son of the late Herman Joseph and Mildred Walker Garrels.

He farmed north of Revere until 1945 when he left to serve in the United States Army.

After his military service, he returned home to Revere to farm and to raise livestock.

On February 13, 1949 he was united in marriage to Mary Louise Heinze at the Evangelical & Reformed Church in Kahoka.

Joe was a member of the Revere Community Church and later St. Paul United Church of Christ in Kahoka where he served on the cemetery board.

After he retired from farming, he was employed part-time for a number of years at Southeast Iowa Feeder Pig Inc., IMI Equipment, and Dadants Incorporated.

Joe liked to keep busy for most of his life and did not seek retirement until he turned 88.

He had many friendships through activities at both the Revere Community Center and Kahoka Senior Housing.

He loved his family and enjoyed making trips back to Iowa to visit cousins there.

Funeral Services honoring the life of Joe were conducted at 10:00 am on Friday, October 30, 2020 at the Wilson & Triplett Funeral Home in Kahoka.

Inurnment will be held at a later date.

Memorial contributions in memory of Joe were suggested to the Clark County Nursing Home’s Activity Fund.

You are invited to share your memories of Joe and leave a condolence at www.wilsontriplett.com.

He served as a Utility Repairman (maintenance) with the 176th Signal Repair Company during World War II.

He was stationed for one year and twenty-eight days in Okinawa, Japan and attained the rank of Technician 5 (E-5).

The caissons have been muffled and the flag lowered for our comrade, who joined the staff of the supreme commander 26 October 2020.

At his final post we with him fair skies and smooth pathways.