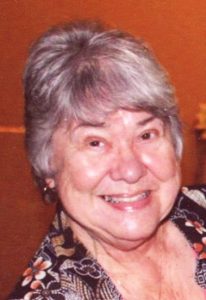 Marilyn was born on January 1, 1940, in Keokuk, Iowa, the daughter of Floyd and Thelma (Dienst) Wright.

She graduated from Kahoka High School in 1957, and went on to receive her Bachelors in Education at Culver-Stockton College in Canton, Missouri.

On December 25, 1957, she was united in marriage to Robert “Bob” Vincent Land at the Alexandria Presbyterian Church in Alexandria, Missouri.

Marilyn was a lifelong member of Alexandria Presbyterian Church and the Order of the Eastern Star, recently receiving her sixty year pin.

Marilyn worked side-by-side with her husband at Bob Land’s Texico station in Alexandria for fifty-two years, closing the store on August 31, 2012.

She also worked at the Clark County School District.

Family was a priority for Marilyn, and she was the best mother, grandmother and great-grandmother her family could ask for.

She was always there when you needed her.

Marilyn was also a loyal friend and worked hard to stay in touch with her life-long friends.

Marilyn is preceded in death by her parents, her husband Bob and her son Bobby Land.

Marilyn’s life will be celebrated with a funeral service at 1 pm on Thursday, November 5, 2020, at Alexandria Presbyterian Church in Alexandria, Missouri, with burial to follow at Oakland Cemetery in Keokuk.

Visitation will be held on Wednesday from 2 to 7 pm, with family meeting friends from 4 to 7 pm at DeJong-Greaves-Printy Funeral Home, 917 Blondeau Street, Keokuk, Iowa.

For the safety of those attending, face masks are encouraged and social distancing practices will be in place.

Memorials may be directed to the Alexandria Presbyterian Church.