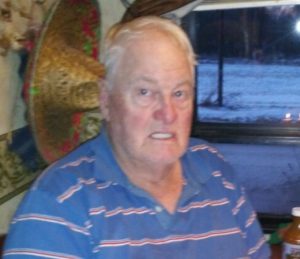 He was born on January 20, 1942 in Keokuk, Iowa to Leslie Joseph and Berniece Josephine (Richey) Christy. Roger married Patty Harris on October 31, 1975 in Kahoka, Missouri.

Roger is preceded in death by his parents, his brother Joe Christy and his sister Holly Sue Christy.

Roger was an avid outdoorsman always hunting and fishing.

He enjoyed going out on the river in his boat.

He worked as a mechanic and a truck driver most of his life always tinkering or repairing something.

He could rebuild almost anything from scratch.

He loved to ride around on his riding lawn mower and in younger years competed in tractor pulls.

He enjoyed gardening and was proud to show everyone the vegetables he had grown each year He loved spending time with his family and telling them stories of his childhood.

The family would also like to acknowledge several important people in Roger’s life. Steve (Donna) Watson of San Angelo, Texas, a niece; Nadine Burgtorf of Michigan, a nephew; Stoney (Kelsey) Harris of El Dorado, Texas, his aunt and uncle by marriage; Kyle & Elaine Donaldson of Sonora, Texas, special friends; Jerry & Peggy Thorn of Alexandria,Missouri, Lonnie Meeks of San Marcos, Texas, his nurse that took such good care of him, Michelle, and his personal representative; LuEene McCracken.

A memorial visitation honoring the life of Roger will be held from 5:00 pm until 7:00 pm on Thursday, November 5, 2020 at the Wilson & Triplett Funeral Home in Kahoka, Missouri, In accordance with Roger’s wishes, cremation rites will be conducted. Funeral service will be held at a later date. The family has requested memorial contributions in lieu of flowers in Roger’s memory and will be accepted at the funeral home. You are invited to share your memories of Roger and leave a condolence at www.wilsontriplett.com.