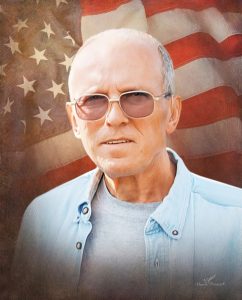 Bob was born on April 16, 1949 in Keokuk, the son of the late Robert Eugene and Helen Marie (Gibson) Little Sr.

He served in the United States Navy during the Vietnam War.

Bob married Zarina Nelson in 1972 and then later divorvced.

To this union was born two daughters; Melissa (Travis) Riney of Revere and Shana (Todd) Reed of Alexandria.

Mr. Little worked at the Ordinance plant in Burlington.

He later became a loan officer at Kahoka State Bank for several years.

Bob was preceded in death by his parents.

In accordance with Bob’s wishes, cremation rites will be accorded and services will be conducted at a later date.

Memorial contributions in Bob’s memory are suggested to the Son Valley Youth Ranch in Winchester.

You are invited to share your memories of Bob and leave a condolence at www.wilsontriplett.com.

He served as a Storekeeper on the USS Cleveland (LPD-7), and Austin-class amphibious transport dock (landing platform, dock).

He served one year, seven months and five days sea service during the Vietnam War, and attained the rank of Seaman (E-3).

He was transferred to the United States Naval Reserve until 16 October 1974.

The ship has been darkened, and the bell mournfully tolls for our shipmate who joined the staff of the supreme commander 10 November 2020.

During his final assignment we wish him fair winds and following seas.