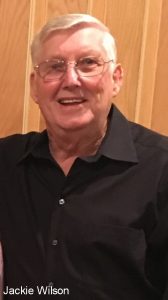 Jack was a lifelong resident of Alexandria, who was born at home to Howard Lee “Whitey” and Viola Mae Brooks Wilson on September 2, 1937.  On October 20, 1956, he was united in marriage Rosemary Protsman in Keokuk.

He was preceded in death by his mother and father, one daughter, Debra and one brother, Jim.

Jack was a veteran of the United States Army Reserve and proudly served his country.

Jack worked at Keokuk Steel Castings for forty-three years until his retirement in 1999.

He held numerous union official titles, including steward and safety rep and was also an auctioneer for thirty years.

Jack loved to bowl and bowled with the same team for forty years and continued to bowl until his stroke at 78.

He was a fan of St. Louis Cardinals, Country and Western music, loved traveling on family cruises, road trips to Osage Beach, Branson, Tunica, and was drawn to the mountains.

Jack was looking forward to an upcoming Thanksgiving in Colorado.

An exceptionally strong man, Jack survived a serious burn, Flood of ‘93, prostate cancer, and a stroke.

He would help anyone in need and performed numerous benefit auctions.

Jack was a lifelong Democrat and his last outing was Election Day to cast his vote.

After being badly burned at Keokuk Steel Castings, he chose to be a tissue donor and his skin will help other burn and mastectomy victims.

In lieu of flowers, memorials may be made to the family to help offset medical costs or to the American Cancer Society.

A celebration of life will follow at a later date.

Visitation will be from 4-7 p.m., Friday, November 13, 2020 at the Vigen Memorial Home in Keokuk, with family meeting with friends at that time.

Social distancing requirements will be in place and masks are required.