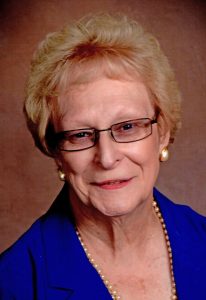 Charlotte grew up in Hastings where she graduated from Hastings College and the Mary Lanning School of Nursing with her Bachelor of Arts in Nursing.

After college she moved to California where she worked as a nurse and met and married John F. Steinmann, Jr. of the US Navy.

Later they moved to Kahoka, Missouri where together they raised their three children.

Charlotte was an active member of the United Church of Christ, a Girl Scout leader, and a community volunteer.

She was instrumental in bringing community parks and a public swimming pool to this small rural community.

Charlotte’s professional career led her to be the first Health Occupations instructor for Clark County High School, a PAT parent educator, and later a state nursing home inspector for the Missouri Division
of Aging.

It is during this time that she met and married William (Bill) Browning in 1995. They resided together
in Columbia where he preceded her in death.

Charlotte enjoyed living in COMO where she was a member of the Broadway Christian Church, a volunteer at the local Senior Center and Rainbow House.

She will be missed by her family, devoted friends and card clubs.

Graveside services for family and friends will be held at the Salisbury Cemetery at 3:00pm on December 28, 2020.

In lieu of flowers, memorials may be made to the Shriners Children’s Hospital, the Traditional Music program of Broadway Christian, and the Columbia Senior Activity Center.

Tributes may be shared with the family at www.bachyager.com.