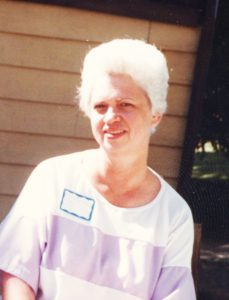 Mary was born in Keokuk, Iowa, on November 22, 1943, the second of seven children born to Charles Merritt and Alice May (Arthur) Davis.

She spent most of her life in Alexandria, Missouri, but later moved to Keokuk, Iowa, after the 1993 flood.

Mary was known as the “Big Sis” and even with her older brother, John, she could hold her own… and then some!

Even though she bore no children of her own, Mary helped to raise a multitude of kids, both in and out of the community.

Mary admired the music of the performer Buddy Holly and attended many of the yearly celebrations of his life in Clear Lake, Iowa.

She also enjoyed bowling and belonged to a local women’s bowling league.

Mary especially loved going to all of the family and community functions before a tragic accident required her to take residency in a long-term care facility.

She died due to complications from exposure to the Corona Virus.

Due to Covid-19, Mary’s life will be celebrated with a private graveside service on Wednesday, December 23, 2020, at Oakland Cemetery in Keokuk.

Memorials may be directed to the Salvation Army.