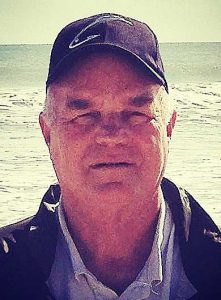 He is survived by two brothers: David (Laura) of Fort Meyers, Florida and Howard (Pati) of Burlington, Iowa.

Dennis was preceded in death by his wife: Betty and his parents: Warren G. & Lois Toops of Kahoka.

Over the years, Dennis owned businesses including a service station in Donnellson, Iowa and later “Denny’s Chrysler – Plymouth – Dodge” dealership in Kahoka.

To many, he was known as “Denny Mopar” and always carried a shop rag in his back pocket to keep his cars shining.

Later on, Denny moved to Columbia, Missouri where he met his wife Betty and obtained an Archway Cookie franchise servicing all of Columbia and the Ozark area.

In retirement, they moved to Sunrise Beach, Missouri having a home on the lake.

His semi – retirement job was working part time at Menards at the Lake of the Ozarks.

He always liked talking and being around people.

His loves for life were his wife Betty, boating, fishing and eating out.

He took part in many fishing tournaments at the lake and once came in second place.

He was an active member of the Elks Lodge for many years.

His body has been entrusted to Schmitz Funeral Home for cremation.

Per Denny’s request, there will be no services.

In lieu of flowers a memorial has been established in his memory for the Special Needs Foundation in Burlington and can be mailed to the family at: Schmitz Funeral Home, P.O. Box 22, West Point, Iowa 52656.

Online condolences may be made to the family at www.schmitzfuneralhomes.com. Schmitz Funeral Home of West Point is assisting the family with arrangements.