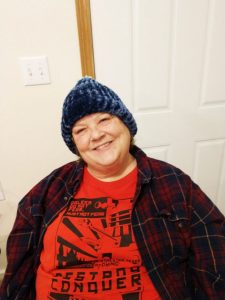 Conda was born on March 5, 1955, the daughter of the late Alan Duane and Sara Mae (Laymon) Lewis.

She married Richard Lindell on August 11, 1973 at Epworth United Methodist Church in Phoenix AZ and he survives.

Conda was employed by the VA Hospital in Phoenix as a release of medical records specialist.

She valued her family greatly and adored her grandchildren and one special great-granddaughter very much.

Conda was so “glad to be home again”.

She loved watching it snow, crocheting, reading many books, and was looking forward to having a garden for her and Richard to enjoy this year.

Her family will miss her wonderful cooking, as she never made a bad dish.

Besides her parents, Conda was preceded in death by her stepmother, Linda, parent-in-laws Harry and Eleanor Lindell, and sister-in-law, Beth Lewis.

There will be no services at this time, as a celebration of life will be held at a later date.

Memorial contributions in memory of Conda are suggested to the family with checks payable to Richard Lindell.

You are invited to share your memories of Conda and leave a condolence at www.wilsontriplett.com.