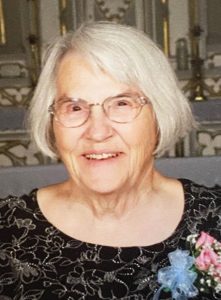 She was born on September 24, 1932 in Bonaparte, Iowa, the daughter of Isaac and Opal (Shoemaker) McCracken.

On October 26, 1951, she married Roy Thompson Graham in Farmington, Iowa.

He preceded her in death.

She was preceded in death by her husband: Roy; son: George Graham; eight brothers and sisters.

Paula received her Bachelor of Arts in History and Government at Parson’s College.

She taught at St. Mary’s and Clark County School District.

She was a member of the Democratic Party and Missouri State Teacher’s Association.

She was an author of two books “Spirits” and “Poems Forever”.

After working at the Iowa Army Ammunition Plant, she dedicated years helping employees that worked on nuclear lines receive compensation and medical care under EEOICPA.

Burial will be at Greenglade Cemetery in Farmington.

A memorial has been established in her memory for the Farmington Library.

Online condolences may be made to the family at www.schmitzfuneralhomes.com.

The Schmitz Funeral Home of Farmington is assisting the family with arrangements.