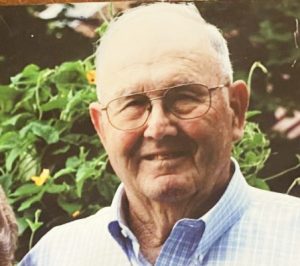 Forrest W. Phillips, 97, of Kahoka, Missouri passed away Thursday, March 4, 2021 at the home of his son, Keith Phillips.

He was born January 9, 1924, the first of five children to Victor and Gladys Morrison Phillips in Luray, Missouri.

In January 1943, at the age of 18, Forrest was drafted into service with the United States Army for WWII.

He served in the Army from 1943-1946 with the 71st Evacuation Hospital, earning the rank of Staff Sergeant.

Forrest served in Papua New Guinea, Noemfoor, Philippines, and with the First Occupational Forces in Japan.

During his active duty he was deployed to three amphibious landings, securing three separate beachheads.

Forrest returned home and later married Dorothy Jean Sisson on August 10, 1947 who preceded him in death on March 22, 2019.

Forrest was a lifelong farmer.

In the early years of his farming career, he enjoyed running a crew that traveled throughout the area shelling corn.

In addition to farming, he owned and operated Phillips Grain.

He later became the co-owner of Green Valley Seed.

Forrest, a devoted Christian, was a longtime active and faithful member of First Baptist Church in Kahoka, serving as a deacon and Sunday School teacher for many years.

Most recently, he had been attending Amazing Grace Bible Church in Kahoka.

He enjoyed having a houseful of family and cherished each and every member.

Whether it be clearing brush, building terraces, or building ponds and lakes, Forrest loved time spent in the bulldozer.

Forrest and Dorothy worked alongside one another “keeping garden.”

They tended to multiple gardens and shared their harvest with their family.

Forrest loved to travel with his family, and he and Dorothy were able to take several family vacations with their children and grandchildren, which they enjoyed most of all.

He was preceded in death by his wife, his parents, and two siblings: Talmage Phillips and Evelyn Phillips Clayton.

Funeral services with full military rites honoring the life of Forrest were held Sunday, March 7 at 2:30 pm at the Wilson & Triplett Funeral Home in Kahoka.

A visitation was held from 1:00 pm until the time of services on Sunday.

Graveside services were held at the Kahoka Cemetery.

In lieu of flowers, memorial contributions could be made to Amazing Grace Bible Church for Ina York or to the Clark County Senior Center.

He served as a Light Truck Driver with the 71stEvacuation Hospital during World War II attaining the rank of Technician Third Class (T-3/TEC-3).  He served for one year, nine months, and three days overseas.

with two Bronze Battle Stars for the New Guinea Campaign and the Battle of Luzon, Philippines

He was inducted 26 January 1943, received an honorable discharge 9 January 1946 and returned to Luray, Clark County, Missouri.

The caissons have been muffled and the flag lowered for our comrade, who joined the staff of the supreme commander 4 March 2021. At his final post we wish him fair skies and smooth pathways.