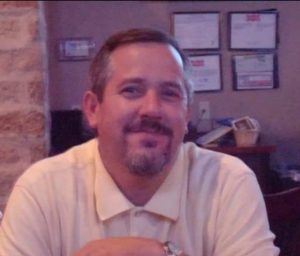 He was born August 16, 1962 the son of John “Jack” Loren McAndrew and Kathryn Ladene (Ellison) McAndrew.

Mike graduated from Clark County R-1 High School with the class of 1980, where he forged some of his most impactful and longest lasting friendships.

At the time of his death, he was Director of Operations for American Income Marketing Services, a sister company to Globe Life Insurance Company, where he had worked for more than 30 years, at various times in Oklahoma City, OK, McKinney, TX and Waco.

Mike loved to fish and cherished his trips with close friends and family to Canada and Alaska.

He was an avid golfer, super-fan of the Mizzou Tigers, John Deere enthusiast, and enjoyed meeting with the Firebird Car Club to show off his cherished 1968 Firebird convertible.

He is survived by a son, Ryan Cox of San Antonio, TX, a daughter, Loren McAndrew of Waco, TX, one brother, Mark McAndrew of McKinney, TX, three sisters, Jeanne Samii of Seguin, Texas, Lucinda “Cindy” Logsdon of Phoenix, AZ, and Melinda “Mendy” Roberts of San Antonio, Texas, along with many nieces and nephews with whom he was very close.

He was preceded in death by his parents, a sister, Theresa Baker, and a brother, John L. McAndrew III.

Mass of Christian Burial was held Monday, March 29, 2021 at St. Michaels Catholic Church in Kahoka. Burial was in the Kahoka Cemetery.

Visitation was held Sunday, March 28, 2021 at the Vigen Memorial Home in Kahoka with the family meeting with friends at that time. A vigil and rosary service was held at 4 p.m. at the funeral home.

In lieu of flowers, memorials may be made to the Jack and Ladene McAndrew Flagship Scholarship Endowment at the University of Missouri.

Named for his parents, the fund provides college opportunities to students from Mike’s alma mater, Clark County R-1 High School. Contributions may be made in his memory by designating this specific endowment at https://bit.ly/3983Ilo or by check with specific instructions sent to “Mizzou Gift Processing, 407 Reynolds Alumni Center, Columbia, MO 65211.”