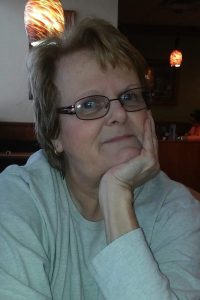 Born Tuesday, November 6, 1956 in Keokuk, Iowa, Vickie Sue was the daughter of the late Sidney Irvin Fox and the late Betty LaRue (Evermon) Fox. She was the wife of the late Paul Milton Pangborn who passed in July 2016. They were married on May 2, 1992 and had 24 years of marriage together.

She was a 1975 graduate of Revere High School in Revere, MO.

Vickie worked for the Higginsville Habilitation Center for 28 years as a Developmental Assistant.

She was the Past President of the (AFSCME) American Federation of State, County, & Municipal Employees.

Vickie had many interests including crafts and craft shows, gardening and canning vegetables, and going on trips with Paul to their lake cabin.

Vickie had a great passion and love for her fur baby Bo.

She is survived by her sisters, Lori Ann Fox and Loretta Lynn Johnston both of Higginsville, MO.

She was preceded in death by her sister, Brenda Kay Fox and a brother-in-law, Chuck Johnston.

Funeral services were held Sunday, April 18th at 1:00pm at the Vigen Memorial Home in Kahoka.

Interment was in the Kahoka Cemetery.

Visitation was held Saturday, April 17th at Vigen Memorial Home from 6:00 to 8:00pm with the family meeting with friends at that time.