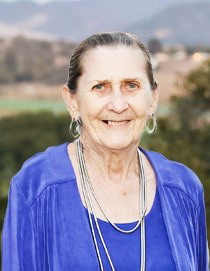 Marvene was the younger of Marvin and Ruth (Sherwood) Muhrer’s two daughters.

She was born at home on the family farm, southeast of Kahoka, and was confirmed in the St. Paul Evangelical United Church of Christ.

After high school, Marvene received a cosmetology license in Burlington, Iowa, and assisted in caring for her mother and sister’s hair needs for several years.

They had a daughter, Tamila Jo, in 1958, while she and her husband lived on the farm.

Marvene assisted in the farm chores, helped gather in the crops, fixed meals for hired hands and neighbors, and raised her daughter.

Soon they moved to Burns, Oregon, where she worked at Bennett Hotel as a clerk and assistant manager.

One night, while working at the hotel, a man came into the front office and asked for a room quickly.

He said he had just stabbed a man at a local bar and needed a place to hide for the night, so she gave him a room.

After returning to Kahoka, Marvene worked with family at Dr. Kirchner’s Chiropractic office and cared for her family as a wife, mother, and homemaker.

Marvene and her husband later moved to Springfield, Missouri, and became an apartment manager for a large apartment complex.

When the family moved to Lebanon, Missouri, Marvene made costumes for entertainers at the Lodge of the Four Season’s at Lake Ozarks, Missouri.

Marvene also made costumes for herself and local ladies and attended Elvis concerts in several of his concert locations.

Marvene worked in the jewelry department and helped numerous customers pick out jewelry for their spouses and loved ones.

After more than 15 years of employment, she retired and stated that she was not going to help move Walmart again.

After retiring, she designed and helped remodel the home they resided in for over 30 years.

She was preceded in passing by her husband, John Milan McCoy, her parents, Marvin and Ruth Muhrer, and her sister, Lois Kirchner.

She is survived by her daughter Tamila Jo McCoy and granddaughters, Nataly (Patrick) Beck and Nycole (Daniel) Falgoust, her great-grandchildren, Nicholas, Dakota, and Dustin, and several nieces, nephews, and friends.

Funeral services honoring the life of Marvene were conducted at 1:00 pm on Saturday, June 19, 2021 at the Wilson & Triplett Funeral Home in Kahoka.

Memorials in lieu of flowers could be sent to the St. Paul Cemetery.