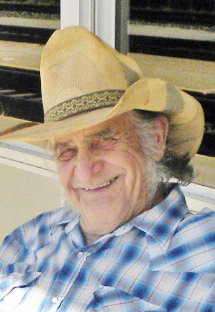 Born on May 26,1933, in Geneva, Iowa, the son of George A. and Dorothea (Willard) Luebbers. He married Patricia Skinner, they later divorced. On November 25, 1989 he married Ruth Emma Petty at Saint Boniface Catholic Church in Farmington. She preceded him in death on June 17, 2007.

He was preceded in death by his parents, wife Ruth, step son Larry Petty, sister Agnes,  daughter in law Sylvia.

Gerhard was a member of the Saint Boniface Catholic Church, and The Knights of Columbus. He loved riding horses, welding, farming, ranching, dancing and watching western shows. Most of all he loved spending time with family and friends.

Mass of Christian Burial will be held Monday, October 25, 2021, 10:00 a.m. at Saint Boniface Catholic Church in Farmington with Father Dennis Hoffman as Celebrant. Burial will be at the String Prairie Cemetery near Argyle.

A memorial has been established in his memory.

Online condolences may be made to the family at www.schmitzfuneralhome.com. Schmitz Funeral Home of Farmington is assisting the family with arrangements.