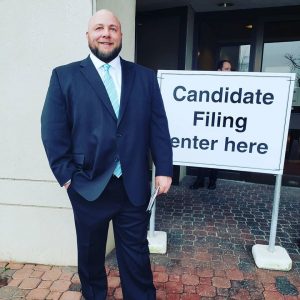 Charles West of rural Clark County has filed as a Democrat candidate for the U.S. House of Representatives for Missouri’s Sixth District. He is one of four Democrat’s challenging incumbent Republican Sam Graves.

“This is something I’ve wanted to do for a long time,” said Charles West of rural Clark County.

On Wednesday, February 25, West took a step few will ever take:  he filed as a candidate for Missouri’s Sixth District seat in the U.S. House of Representatives.

West is one of four Democrat candidates challenging Republican Sam Graves for his seat in Congress.

“There’s a lot of division in the country.  We see it on a daily basis.  I don’t see anyone trying to work together,” West said.

“I’m a Democrat because back in the day, Democrats stood for the working man.  But everything shouldn’t be about party.  We have to work for people, not the party.  We need to sit down, work together, and find solutions,” West added.

West serves on the Clark County R-1 School District board of directors, and education issues are important to him.

He added that the State of Missouri needs to support better teacher pay to keep quality teachers in the state.

“If we don’t supply that knowledge, they’re going go somewhere else after high school.  They’re not going to stay here.”

Having grown up in rural Missouri, West sees plenty of needs in rural areas, including broadband internet access, county roads and incentives for rural manufacturing.

“We also need more trade deals for farmers. We need to work as a country so farmers aren’t having to rely on bailouts,” he said.

“Every factory I visit says they can’t keep workers.  A lot of companies that I work with are getting people from Mexico in to do good-paying jobs, because nobody else wants to do them,” he said.  West believes immigrants should work on becoming U.S. citizens.

West is a strong believer in the Second Amendment, and bristles at the suggestion of confiscating legally owned guns.

“A bad thing is, when people see a ‘D’ next to your name, they think you’re going to be taking away their guns.  We shouldn’t be taking anyone’s guns,” he said.  “It’s a Second Amendment right.”

West is 40 years old, and is a 1998 graduate or Clark County R-1.  He attended Culver-Stockton College in Canton, and played football until a career-ending knee injury.  After that, he lost his scholarship and entered the workforce.

He now works as an Account Manager for French Gerlman Electric in Quincy, Illinois.

“I’m in factories and construction sites day in and day out.  I help with automation for machines and electrical transmission.”

West is once divorced, and now has a fiance, Melissa, and daughter, Hayden.  His father, Jim West, is from the Milan and Green City area, and he still has family there.  His mother, Kathie Roberson, hails from Lewis County.  Charles is a member of the Eagles Club in Canton, and the Masonic Lodge in Keokuk, Iowa.

“I’m just a regular person that wants to work for people,” he said.  “A lot of the people in office today aren’t there for the people. They’re in it for the party and a paycheck,” West said.  “It shouldn’t be like that.”

As a new candidate, West is still getting started, looking for a campaign manager and a reliable treasurer.  A campaign website is under construction.

West can be reached at charleswestforcongress@gmail.com.