These days, we could all use a little news that doesn’t have anything to do with the Coronavirus Pandemic, right?

Through our Facebook page, we reached out to CCR-1 graduates from the Classes of 2010 or before to see what they are doing today.

Clark County R-1 High School graduates have gone out into the world to accomplish many things.  Some went to college.  Others entered the workforce.  Still other started families.

Our first feature will be U.S. Army Captain Devin Brotherton:

Did you join the Army right out of high school, or did you go to college first?  If college, where?  If not, what was your route to becoming an officer?

I graduated high school in May 2003, started college at Western Illinois University in August 2003, and graduated with my Bachelors of Arts Degree in December 2008.  Once in college, I enlisted in the Army on January 21st, 2004 as an Infantryman.  I served as an enlisted infantryman until May 2010 when I transitioned to become a commissioned officer.

My route to becoming a commissioned officer was slightly different than most as I did not do ROTC.  I submitted for and received a Direct Commission in the Ordnance Corp and commissioned as a Second Lieutenant on May 4, 2010.  I was promoted to Captain on March 25, 2014 and am expected to be promoted to Major by January 2021.

Since I commissioned in 2010, I have completed my Basic Officer Leader Course as well as Captains Career Course at Ft Lee, VA, and have transitioned to the Logistics Corps.

Why did you decided to join the Army?

My dad was definitely a large reason I wanted to join the Army. He was, as he continues to be, an amazing father that I have always looked up to. I wanted to follow in his footsteps and as most kids want to, I wanted to be like him. When I attended Basic Training at Fort Benning, Georgia I was doing exactly that.  I was walking the same hills and trails that my dad had walked some 30+ years before.

While joining the Army was always a thought in my head; 9/11 solidified my choice.  While the terrorist attacks on 9/11 united our country like I have never seen before, they also showed how vulnerable our country can be and why we need a well-trained force to protect our Great Nation.  I truly felt a sense of duty and obligation to serve.  To quote John F. Kennedy’s 1961 inaugural speech, “And so, my fellow Americans, ask not what your country can do for you, ask what you can do for your country.”

What are some of the skills/specialties you have learned?

During my 16 years in the Army, I have learned many different skills ranging from office administration to training Soldiers to supply chain operations. I would say one of the most beneficial skills I have learned is punctuality (being on time). If I am in the right place, in the right uniform, at the right time then I am set for success. I teach my sons that if you’re early, you’re on time. If you’re on time, you’re late.

What do you do in your day-to-day jobs?

I am currently the Supply and Services Officer for the 2-346th Training Support Battalion.  My job is to serve as the primary advisor to the Battalion Commander on all matters concerning logistics and Soldier sustainment.

Would you recommend it to today’s high school students?

While the Army might be the right path for some, it is not the right path for everyone. Everyone is not meant to be a Soldier in the Army, but for those that have the will and desire to serve their country, I would recommend it 100%.

My beautiful wife Brooke and I currently live in Hattiesburg, Mississippi and have four children. Colin is 15 and a sophomore in high school, Caleb is 6 and in kindergarten, and Briana and Brielle are 14 months old.

If you or a family member graduated from Clark County R-1 in 2010 or earlier, contact us at themedia@centurytel.net, and share your story. 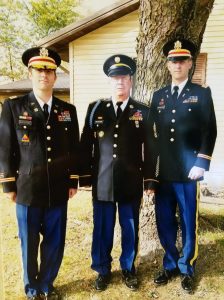