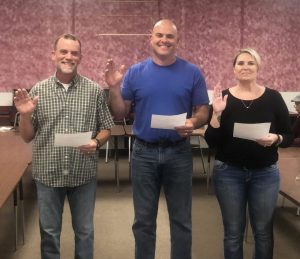 Doug James, Kevin Ross and Heather Webster took their oath of office as CCR-1 school board members on Wednesday evening.

Mark Plenge has been elected as the new president of the Clark County R-1 School District board of directors.  At the board’s re-organizational meeting on Wednesday, June 10, Plenge, who previously served as vice-president, was chosen by the board as its head.  Jason Acklie will serve as vice-president, and Craig Hunziker was elected Treasurer.  Wendy Johnson will remain Secretary.

Following last week’s election, Kevin Ross, Doug James and Heather Webster were sworn in as board members.  Ross returns  to board, and James and Webster replace Brad Sprague and Kari Bevans, who did not seek reelection.

“The parents have made the commitment to bring their kids to school,” Nixon said.  Because of the COVID-19 pandemic, the school district is not providing transportation to summer school as it has in previous years.

At the High School, 33 students are working in Pre-Algebra or Algebra 1.  An additional 29-30 are taking credit recovery courses.

“We should have another graduate,” said High School Principal Jason Harper.  “I’m looking forward to putting on my suit and giving him his diploma.”

Breakfast and lunch are being served in classrooms at Black Hawk, and an additional 90 meals per day are being distributed to those in need.

Nixon praised the food preparation staff for their hard work.

Nixon also reported that over 90 percent of the students are turning in their homework packets, which are sent home Thursday and returned Monday.

We’re going to adapt the this we’re doing in other areas and adapt them to conditioning,” said Athletic Director Jason Church.

The district has started a return to summer fitness activities.  Nearly all of the allotted 96 slots are filled at the high school.  Coaches are supervising in the Fitness Center and equipment is being sanitized.

As team workouts and activity tryouts begin, groups will be limited to 15 outside, and no more than 12 inside.

“We’re asking parents to take their student’s temperatures and not send them if they have a temperature,” Church said.  They are also asking students to bring water, towels and wash their hands frequently.  Attendance will be taken at each event, in case tracking is needed later.

“I’ve seen kids all over town getting together and playing basketball,” said Harper.  “This would be the safest place to do these activities.”

The board discussed reopening the track to the public.

“We need to create a structure so the public is not there while our kids are present,” suggested Church.

The board agreed to reopen the track to the public, while the field is not in use.  Church will try to develop a schedule, but it may not be complete.

“You may have to drive out there and see if you can use it,” said Ross.

The first would be to re-open as normal.

The second bring up several problems.

“If we have to social distance, there is no way we can bus our kids.  That might mean we need to go to an every-other-day schedule,” he said.

The third possibility is remote learning.

“We don’t want to do that,” Kracht stressed.

“We need the kids in front of us as much as possible,” added Harper.

In other business, the board:

-Approved refunding payments made by families of students who were supposed to take the Marine Ecology trip this summer.

-Approved the Early Childhood calendar.  School will start a week later and end a week sooner.

-Approved allowing Exchange Bank to issue debit cards with the school logo.  The school will receive five cents per transaction, up to $2500.

“I don’ see any down side to this,” said Kracht.

-Approve reducing the Professional Development budget to 0.5 percent of the total budget instead of one percent.  This is allowed by the state when the transportation reimbursement to the district .falls below 25 percent.  It will save the district roughly $17,000.

“We’re not comfortable with that,” said Church, “Which is why we have still required annual physicals.”

However, this year, many providers are not giving the low-cost physical as they have in the past.

“We don’t want to cause a financial burden on families of overload medical providers,” said Church.

The board agreed to allow students who had a physical last year to participate this year, unless they have had a significant health event, in which case a current physical will be required.

“It’s not the best,” added Kracht.  He added that the district plans to return every year physicals.

School districts in Missouri utilize a July to June budget year.   As such, the district needs to approve and submit to DESE a budget of the 2020-21 school year.  The budget meeting was set for Wednesday, June 24, at 6:00pm.