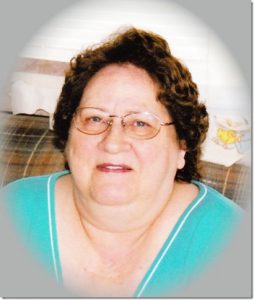 Evelyn was born February 12, 1953 in Keokuk, IA, a daughter of Victor E. and Mary Briley Young.

She was married to Gary O’Day and they were the parents of five daughters: Patricia, Tammi, Jeanne, Rita and Lisa.

She had worked at the former Best’s Boarding Home, then in Home Health Care, and retired from the Clark Co. Nursing Home.

She was a huge Elvis Presley fan and a die-hard St. Louis Cardinals fan.

Her life was spent caring for others before herself and she dearly loved her grandchildren and was generous with them and anyone else that had a need.

Special music was recordings “Wind Beneath My Wings” and “Holes in the Floor of Heaven”.

Additional music was “What a Day” preformed by Faye Barry, Misty Osbon and Janice Barnes.

Burial was in the Chambersburg Cemetery.

Visitation was held at Wilson Funeral Home in Kahoka after 9 a.m. Thursday with family receiving friends from 6-8 p.m.

Memorials are suggested to the family with checks made payable to Patricia Trone.