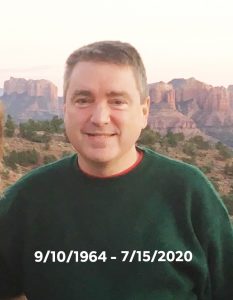 Doug McAllister, 55, passed away July 15, 2020 at his home in Columbia, MO after a courageous battle with pancreatic cancer.

Doug was born on September 10, 1964, in Knob Noster, Missouri, to Fred and Donna McAllister.

After high school at Clark County R-1, Doug obtained a Bachelor of Science in Business Administration-Economics and a Master of Science in Accountancy at the University of Missouri. Doug worked for more than 29 years at MBS Textbook Exchange, LLC in accounting and IT.

He is survived by his wife, Pam, and son, Will. He is also survived by his mother; sisters Julie O’Day of Memphis, Tennessee and Sue Johnson of Kahoka, Missouri; brothers, Jerry McAllister (Mary) of West Plains, Missouri, and James McAllister of Fairfield Bay, Arkansas; sister-in-law, Karen Fuller, Indiana; sister-in-law Suzie Amato of Los Angeles, California, and numerous nieces and nephews.  He was preceded in death by his father and an older brother, David Fuller.

There are no services planned per his wishes.