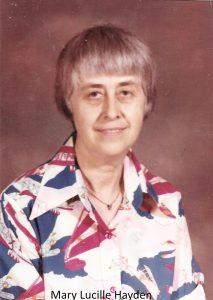 Mary Lucille Hayden, of Jackson, MO, formerly of Keokuk, IA, went to Heaven to spend eternity with her Lord and Savior on December 29, 2020.

Lucille was an only child but her cousin Iola Reeves was like a sister, and they lived close to each other all of Iola’s life.

She enjoyed growing up on the farm at Alexandria MO where she spent time with her father, learning her work ethic from him, and loved her horse Dolly.

She enjoyed playing her French horn in the band and the highlight of her schooldays was when the band performed at the Chicago World’s Fair in 1933.

It was in that band that she made friends with Tommy Daw.

They loved getting together and with their spouses continued to play their instruments and sing their entire lives.

Lucille enjoyed singing in the church choir and teaching the young children at church.

She loved cooking, especially for family, and passed that on to her daughters.

She loved birds (especially cardinals and owls) and flowers.

Her favorite color was red.

Lucille and Frank lived in mainly in Keokuk and Fort Madison with short stints in Chicago and Pontiac IL.

In retirement they wintered in McAllen TX near one of their daughters.

Later she moved to Jackson MO to be near family.

She entered Monticello House of Jackson MO in August 2018 where she lived the rest of her days.

She wanted to go to college so she raised strawberries and vegetables to pay for her BSE degree from Culver Stockton College in Canton MO.

After retirement she substituted at Running Fox Elementary.

She always longed to be back in the classroom.

She loved her students!

Lucille was buried next to her husband in Oakland Cemetery in Keokuk on January 5, 2021.

Due to COVID, there were no services at this time.

In lieu of flowers, memorials may be made to Paralyzed Veterans of America in honor/memory of Mary Lucille Hayden.

The Vigen Memorial Home in Keokuk is assisting the family with arrangements.