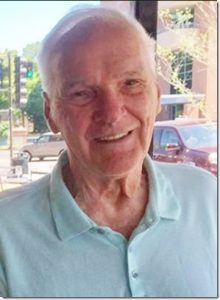 He was born November 17, 1931, in Iowa the youngest child of Glenn and Naomi (Gannon) Stubbs.

He married Patricia Shankster on October 31, 1953, in Kahoka. They had 3 children – Cathy (Stubbs) Geisz, Dennis and Kevin.

He is preceded in death by his parents, his brothers Donald and Gerald, his sister Gretchen (Stubbs)

VanHoof and his wife. He had 6 grandchildren and 9 – soon to be 10 – great-grandchildren.

He taught Industrial Arts and Driver’s Ed in various districts around Missouri (including Kahoka).

He later earned a Master’s in Guidance and Counseling from Northeast Missouri State College (formerly KSTC now Truman) and worked in education for over 36 years.

After he retired he spent 20 years working for FEMA which he enjoyed immensely.

Chuck was a Mason and active in supporting the Rainbow Girls and Grand Cross of Color.

He loved all sports, was an avid golfer, and became a big fan of the Rambler Rugby Club and St. Louis Women’s Rugby Club as well as sports played by his children and grandchildren.

He loved reading, puzzles and the TV show “Jeopardy”.

He became very interested in ancestry and enjoyed finding out about his family.

Chuck and Pat were members of St. Paul UCC when in Kahoka and Webster Groves UCC in St. Louis.

Memorial Graveside services will be held Saturday, June 6, 2020 at 11:30 a.m. at the St. Paul Cemetery in Kahoka with Pastor Dixie Laube officiating.

Arrangements are being handled locally by Wilson Funeral Home in KahokA.