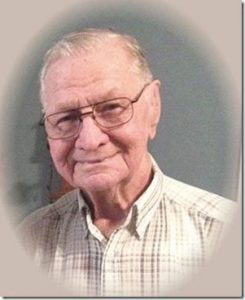 Boyd was born May 3, 1931 in Queen City, MO, a son of William and Allie Atkinson Woods.

In March of 1947 he was united in marriage to Charlotte Harness.

They later divorced and on June 15, 1975, he married Patty Kerr Harness in Anson, MO.

In his early years Boyd was a farmer and did carpenter, plumbing and electrical work.

Boyd continued farming until he and Patty went into partnership at Lee’s Motel and Restaurant in Donnellson, IA, with Boyd’s brother Pearl and Patty’s sister Ila Mae.

In 1982 they purchased a restaurant in Kahoka, MO which became known as Woods Restaurant, retiring in 1993.

That same year they purchased a farm in Chambersburg, MO and restored and remodeled the old brick house where Patty was born.

They hosted many reunions and family gatherings along with many tours of the home.

Boyd was interested in providing recreation for the youth of Clark County.

He and some of his friends formed a committee known as C.A.R.E (County Association for Recreation and Entertainment).

The Roller Skating Rink was built as well as a community building on the same site.

In 2008, Boyd and Patty moved to Kahoka to live out their golden years.

Boyd was a faithful and active member of the Anson Community Church.

He was a Charter member of the Kahoka Lion’s Club and in 2014 received the highest honor, the “Melvin Jones Fellow Award” for outstanding community service, along with many other awards.

Boyd was an avid wood worker, building doll houses, little barns, furniture, checker boards and many baby rattles and rolling pins for little ones and many other items for family and friends.

His building didn’t stop there as he served as project manager, helping build five Habitat for Humanity homes.

For years he and Patty hauled a little train around the tri-state area for the riding enjoyment of many, many “children”..

Boyd was a very loving husband, father, and grandfather.

His happiest times were family gatherings and helping others out in any way.

Boyd and Patty spoke of their extended family as one big family.

He enjoyed playing checkers and very seldom lost a game (except with his great-grandchildren).

Recently he had spent a lot of time playing Solitaire.

Special music was “Stroll Over Heaven” and “In the Garden”.

Friends could call at Wilson Funeral Home from 9 until 5 on Friday.

Memorials are suggested to C.A.R.E. or Anson Community Church.