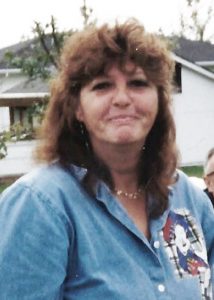 She was born August 11, 1948 in Hurdland, Missouri, the daughter of Monroe and Alice Irene Winn Byrn.

For her it was the thrill of the hunt to find that special item.

She could see a yard sale miles away.

She received the most pride raising her English Mastiff puppies.

Most of all she enjoyed being with her family especially her grandsons.

A funeral service was held 10 a.m. Saturday, August 1 at the Vigen Memorial Home in Kahoka with Pastor Dan Deatrick officiating.

Visitation was held after 1 p.m. Friday, July 31 at the Vigen Memorial Home in Kahoka with the family meeting with friends from 6 p.m. – 8 p.m.