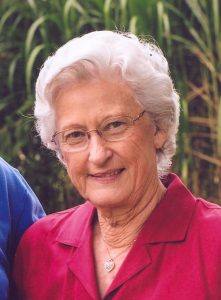 Her long fought battle with cancer was over.

She was born on August 14, 1934 near Derrahs in Lewis County, MO, the youngest daughter of Carl and Mary (Brennan) Logsdon.

She married Dennis F. Schutte February 19, 1955 at the Shrine of St. Patrick.

She was preceded in death by her parents, Carl and Mary Logsdon, one son, Martin Schutte, one grandson, Thomas Jones, one sister, Emma Jean Rempe and one brother, Seldon Logsdon.

A private family service will be held Saturday, August 8, 2020 at 11:00 a.m. at the St. Patrick Shrine with Fr. Rob Fields officiating.

There will be no visitation.

Burial will be in the St. Patrick Cemetery.

Doreen asked in lieu of flowers, please make memorial contributions in her memory to Shrine of St. Patrick with Cemetery Upkeep Fund written on memo line of check.

Online condolences may be made at www.davis-f.com.

Music was:  “Amazing Grace”, “Be Not Afraid”, “On Eagle’s Wings” and “Let There Be Peace on Earth”