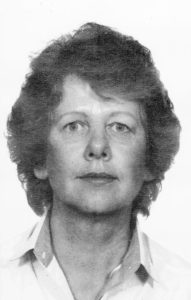 Dixie was born on January 11, 1934, in Washington, Iowa, the daughter of William “Leslie” and Esther (Negus) Clemmons.

She lived in Jacksonville, Illinois and attended high school there and in Franklin, Illinois.

They were united in marriage on February 27, 1954, at First Christian Church in Jacksonville, Illinois.

She was also an active member of the Keokuk community, serving on the YMCA, Keokuk Area Hospital, Keokuk Hospital Auxiliary and Keokuk Savings Bank Boards.

She also volunteered as a den mother.

Dixie was involved in many social activities as well, and loved traveling with the Questers, where she collected glass and porcelain shoes.

Dixie will always be fondly remembered by her family and friends, and was known for her strength of character, generosity, sense of humor and was a truly vivacious, fun-loving person.

She never met a stranger and was known to go out of her way to make newcomers feel welcome.

Dixie and her husband, Bill, valued their community and enthusiastically supported projects and activities in order to help improve it.

She was also a ‘dyed in the wool’ St. Louis Cardinals fan!

Dixie is survived by her daughter Julie Jutte of Keokuk, Iowa; her sister Sandra Flynn of Jacksonville, Illinois, and many nieces, nephews and cousins.

Dixie is preceded in death by her parents, her husband Bill, her son William Fredrick III, and three sisters: Patricia Kitchen, Gladys Smay and Billie Clemmons.

Dixie’s life will be celebrated with a funeral service at 11 am on Friday, August 21, 2020, at the United Presbyterian Church in Keokuk, with burial to follow at Frazee Cemetery in rural Wayland, Missouri.

Visitation will be held at the church on Friday from 10 to 11 am directly before the service.

For the safety of those attending, masks and social distancing are encouraged during the visitation and funeral.

For those unable to attend, the funeral service will be streamed live on the DeJong-Greaves-Printy Facebook page.

Memorials may be directed to the United Presbyterian Church of Keokuk for the new sign project.

DeJong-Greaves-Printy Funeral Home of Keokuk, Iowa, is in charge of arrangements.