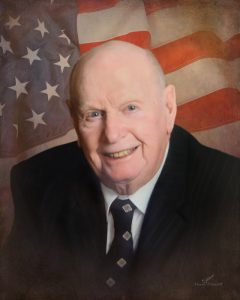 He was the son of the late William Robert and Vera Maude (Stark) Cameron.

Allen graduated from Kahoka High School in the Class of 1950.

He later went to the University of Missouri on the G.I. Bill.

He served in the United States Army during the Korean War.

He married Luella Mae Terry in Kahoka, MO, and from this union a son, John Rodney Cameron, of Keokuk, IA was born.

Allen later married Jenerette Louise Ellison and together they had the late Joseph Mark Cameron and another son; Robert Gustaf Cameron.

Allen married his wife of 50 years; Loresa Bayawa Balansag on February 23, 1970 in San Carlos City, Philippines, and she survives.

He also worked for Sheller Globe and Morse Rubber in Keokuk as a laboratory technician for 25 years.

Allen was a wealth of knowledge, always learning and researching.

You could always find him on his “quadrunner” trying to win the battle with thistles and brush.

He had many hobbies throughout the years from hunting, horseback riding, fighting chickens, and camping.

He was a patient, honest, and fair man.

He really enjoyed watching his sons and grandson tractor pull.

He and his wife Loresa also had the opportunity to travel and were able to see a lot of interesting and memorable places together.

Allen was able to also take part in the Honor Flight.

A once in a lifetime opportunity.

Besides his parents, he was preceded in death by a son; Mark Cameron, and his special aunt and uncle who were like his second parents; Frank and Florence Stark.

In accordance with Allen’s wishes, cremation rites will be accorded, and private family services will be conducted.

You are invited to share your memories of Allen and leave a condolence at www.wilsontriplett.com.

He trained as a Field Wireman at Fort Riley, Kansas and served with the Headquarters Company, 1st Battalion, 31st Infantry Regiment during the Korean War.

He was stationed overseas for one year, four months, and sixteen days, attaining the rank of Corporal (E-4).

He was inducted 3 February 1953, received an honorable discharge 22 December 1954 and returned to Kahoka, Clark County, Missouri.

The caissons have been muffled and the flag lowered for our comrade, who joined the staff of the supreme commander 10 November 2020.