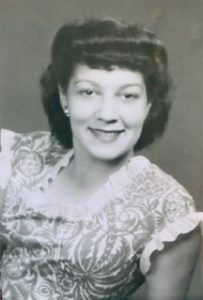 She was born on April 4, 1927, at her parents’ home, just north of Kahoka, MO, which had been the Lewis family country home for many, many years.

She was the daughter of Isaac Newton Lewis V and Cora Bella Christy Lewis.

She was a homemaker and proudly raised six children.

Marianna attended the Oak Grove Country School for eight years and then graduated from Kahoka High School in 1945.

She worked a short time in Keokuk, IA, and then moved to Ft Madison, IA, where she worked at Sheaffer Pen Company.

There she met and married her husband, Ernest Virgil Derr.

She was a faithful and long-time member of the former Congregational Church and then joined the United Presbyterian Church.

She was very active in all aspects of each church, serving as a Deacon and as a member of the women’s organization.

Marianna was quite a seamstress and sewed dresses and pantsuits for her daughter and herself, as well as clothes for other family members.

She also loved to crochet afghans, doing counted cross stitch, and all kinds of crafts.

She anxiously watched her husband drive race cars for 26 years in 21 states while he won 12 I.M.C.A. championships.

She had great fun on many reunions with her siblings at each others’ homes.

They saw lots of shows at Branson, MO, and played rummy and dominos any chance they got.

She loved beaches, both with them and at her daughter’s home in Florida.

She thoroughly enjoyed going to the Ozarks for several years with as many as 14 members of her immediate family.

Marianna was a 26 year member of P.E.O., Chapter U, as well as a long-time member of the following organizations: Keokuk Area Hospital Auxiliary, the YMCA, and the Benevolent Union Board.

She happily did genealogy for her children on both sides of the family.

She put together and gave away several notebooks full of family information and clippings and pictures from their father’s racing career.

She liked reading poems and wrote a few for special friends and family members.

A private graveside service was held on Sunday.

She will be laid to rest next to her parents in the Kahoka Cemetery.

A celebration of life will be held later next year.

Memorials can be made to Bentley’s Playground for the splash pad.