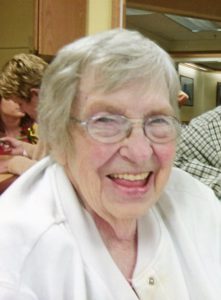 Anna was born in Clark County, Missouri, on September 20, 1921, to Charles and Pearl (Kimball) Haage.

On September 23, 1939, Anna Haage married Alfred C. Varner at the First Baptist Church in Keokuk, Iowa, and were married 52 years.

Of their union three children were born.

Preceding her in death were her parents, her husband, Alfred C., son, Alfred L. and daughter, Joyce and her husband George Kinman, as well as a sister in infancy.

Due to the Covid Pandemic family is requiring masks and social distancing will be followed.

For those unable to attend, the funeral service will be available for live-streaming via Facebook Live on the DeJong-Greaves-Printy Funeral Home Facebook page.

A private family burial will be held at Sunset Memorial Garden Cemetery in Keokuk, Iowa, following the service.

Memorials can be made to the Maintenance Program at Forest Lake Camp in Bloomfield, Iowa or the donor’s choice.

DeJong-Greaves-Printy Funeral Home in Keokuk is in charge of arrangements.