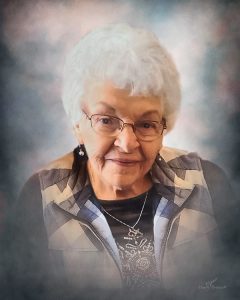 Anna was born June 25, 1937, in St. Patrick, MO, the daughter of the late Walter and Rosaline (Moeller) Uhlmeyer.

She was preceded in death by her husband Larry, her parents, and siblings and their spouses: Kenneth and Rovene Uhlmeyer, Rosemary Uhlmeyer, Alma and Sam Wiskerchen, Ervin Uhlmeyer, Laveta Pearl and William Ellison, one daughter-in-law, Rebecca Logsdon, and her parent-in-laws, Raymond and Laveta Logsdon.

She moved to Quincy and attended Gem City Business School.

Her first job was at Pittsburgh Paints as a bookkeeper.

A few years later she returned to St. Patrick and married Larry.

There they raised six children, and she helped her in-laws with R.C. Logsdon store.

Anna had deep faith in God and was a lifelong member of the Shrine of St. Patrick and Daughters of Isabella.

She enjoyed gardening and especially liked to plant flowers.

Anna was an avid baker, she baked for her grandchildren, friends, and neighbors regularly.

Her love and pride came from her faith in God and her family, especially her grandchildren, which she cared for deeply.

Her door was always open to friends, neighbors, and family.

She was a grandmother to many outside of the family and will be truly missed by many.

A prayer service was held Friday, March 26, beginning at 5PM with visitation following until 7PM at the Shrine of St. Patrick.

A Mass of Catholic Burial was held Saturday, March 27, 2021, at 10 AM at the Shrine of St. Patrick. Father Rob Fields presided the service.

Memorials in Anna’s name are suggested to the St. Patrick Cemetery or Londyn Logsdon for her fight with cancer and may be sent to the Wilson and Triplett Funeral Home.

To send flowers to the family or plant a tree in memory of Anna Logsdon, please visit our floral store.