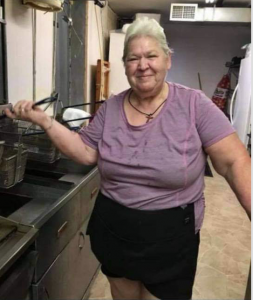 Carol was born January 8, 1963, in Moline, IL, a daughter of the late Victor Lee and Bonnie Marie (Hedrick) Goben.

Carol was a goofy and memorable woman, her contagious smile lit up the room every time she walked in.

Carol enjoyed cooking, she worked at Steve’s Family Dinning and Cookies for a period of time, both located in Kahoka.

Prior to moving to Kahoka, Carol and Greg owned and operated two businesses in Texas, Clark Landing and the Horseshoe Lounge.

Carol had many different collections, one being a variety of crosses, another being plants.

Carol and Greg could be found watching NASCAR racing on their Sunday afternoons, her favorite driver was the retired Mark Martin.

Carol will be greatly missed by many, including her fur babies, Louie and Tatar Bud.

Carol was preceded in death by her parents.

There will be no services at this time.

A private celebration of life will be held at a later date.

Memorials contributions in Carol’s name are suggested to the family with checks payable to Doug Clark and may be sent to the Wilson and Triplett Funeral Home in Kahoka MO.

You are invited to share your memories of Carol and leave a condolence at www.wilsontriplett.com