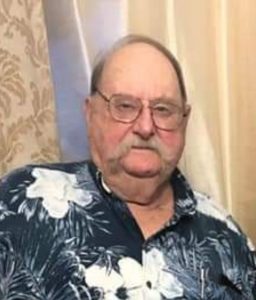 Roger Leaton Arntzen, 84, of Jacksonville, FL, formally of Kahoka, MO, passed away unexpectedly February 6, 2021 due to complications of COVID 19.

After the untimely death of his father, his mother married Edward Parker and in December 1951, they all moved to a farm in the Ashton, MO area.

He graduated from Kahoka High School with the class of 1954.

He enlisted in the United States Navy shortly after graduation.

Fichtenkort with whom they had two sons, Jeffry and Scott.

During this time in the Navy, Roger had many overseas tours, including operations in Viet Nam.

During one operation, his plane was shot down which earned him a Purple Heart.

During the last years of his 20 years of service, Roger was stationed Subic Bay where he met his future wife, Tessie Centeno.

After their marriage, he adopted her five children and brought them to the US to live.

Those who knew Roger knew of his ability to never meet a stranger.

He had the gift to gab, make a joke and always had a laugh just waiting to happen.

He inherited his mother’s love to cook and while he loved a well-prepared meal, he could make one just as well.

He always lamented that his fried chicken “just wasn’t as good as mom’s”.

Roger was a family man… a dedicated son to his mother, Clara, a loving big brother, husband, father and grandfather.

He was preceded in death by his parents, a step-daughter, Rowena Arntzen, and 2 nephews, David E. Parker and Clayton J. Parker.