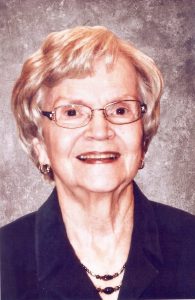 She was born March 26, 1935, the daughter of Nick and Marie (Ellison) Kirchner of St Patrick MO, where Kathleen spent all her childhood with her parents and three brothers.

She married Bernard H Uhlmeyer on May 30, 1953, at the St Patrick Catholic Church in St Patrick, MO.

After her marriage, Kathleen and husband Bun started their family and put down rural roots with the purchase of their first farm in 1955.

Mrs. Uhlmeyer was a life-long member of the Shrine of St Patrick Catholic Church where she served on the Liturgy Committee and as a member of the church council.

She was also a member of the Daughters of Isabella and St Vincent DePaul Society.

Her greatest loves and joys in life were her husband, children, grandchildren and great-grandchildren.

She and Bun enjoyed traveling around the country to visit family and take vacations.

She is also survived by 16 great-grandchildren, with 2 more expected.

Kathleen was preceded in death by her husband, parents, three brothers (John Nick, Jim, and Bill), a daughter (Kathy DeCoster) and an infant grandson (Daniel Uhlmeyer).

Visitation will be held at the Davis Funeral Home in Canton on Thursday, June 24 from 5:00 to 8:00 pm with family present.

Father James Wheeler will lead a prayer service at 7:00 pm.

A Mass of Christian burial to celebrate her life will be held Friday, June 25 at 10:00 am at the Shrine of St Patrick.

Burial will be in St Patrick Cemetery alongside her husband.

Music will be by organist Julie Kirchner and vocalist Katrina DeCoster.

The family suggests memorials be made to St Patrick Cemetery for Perpetual Care.

On-line condolences may be left at www.davis-fh.com.