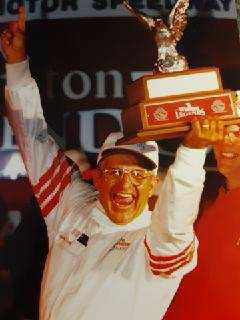 Ramo Eugene Stott, 87, of Keokuk, passed away at the University of Iowa Hospital on Thursday, August 19, 2021, after a long bout with cancer.

An always “colorful” guy with a “hundred dollar” smile.

He graduated from Kahoka High School in 1953.

He was united in marriage to Judy Ann Hawley on the family farm in Kahoka, Mo.

Ramo served in the Army National Guard in Keokuk.

Ramo was a professional stock car driver from 1955 until 1990 with over 400 victories to his credit.

“Pop” started with Jalopies on the dirt, All the way to the high speeds of the 2½ mile super speedways of Daytona and Talladega in his famed #7 Superbird or the occasional wheel borrow race if need be.

With a second place finish in the 1972 Talladega 500 as his top finish.

After “retiring” from racing Ramo drove in many “old timers” races winning more times than not.

In 1995, he was invited to drive in a special race at Charlotte motor Speedway on the ¼ mile front stretch track before the Winston All Star Race.

With a field of 30 plus cars, Ramo started mid-pack and took the win in impressive style.

Ramo is survived by his wife of over 66 years, Judy Ann, Ramo’s best ever team mate, sidekick, and partner.

Ramo touched lives from all points of the USA and will be dearly missed.

He would tell people he “lived the American dream” and was red, white and blue to the very end.

He was preceded in death by his parents, sister Louise Rockhold; brother Danny Stott, and granddaughter, Barb Masterson.